Weapon craftmanship has long held a mystical appeal in the world. The challenge of making high quality blades or weapons in general is commonly featured in stories around the world. In fact, blacksmiths have come to symbolise a noble profession that aid would be heroes on their journey. This is no different for Nepalese and their symbolic weapon, the Khukri.

Who are the Bishwakarmas & Kamis

Within the remote Himalayas in Nepal, lives a community of artisans who have practiced the art of Khukri crafting from generations. The knowledge has been passed down by generations from their forefathers and lives on through their dedication. The Biskwakarmas & Kamis are the people responsible for providing Gurkhas with the sharpest and most durable of Khukris for battle.

The Khukri is known as the world’s most famous and feared knife due to the quality of its blade and the fearlessness of its masters. How are these knifes made to the level of quality that they are known for? In this article we cover the art of Khukri forging that involves no more than a few simple hand tools and years of mastery. 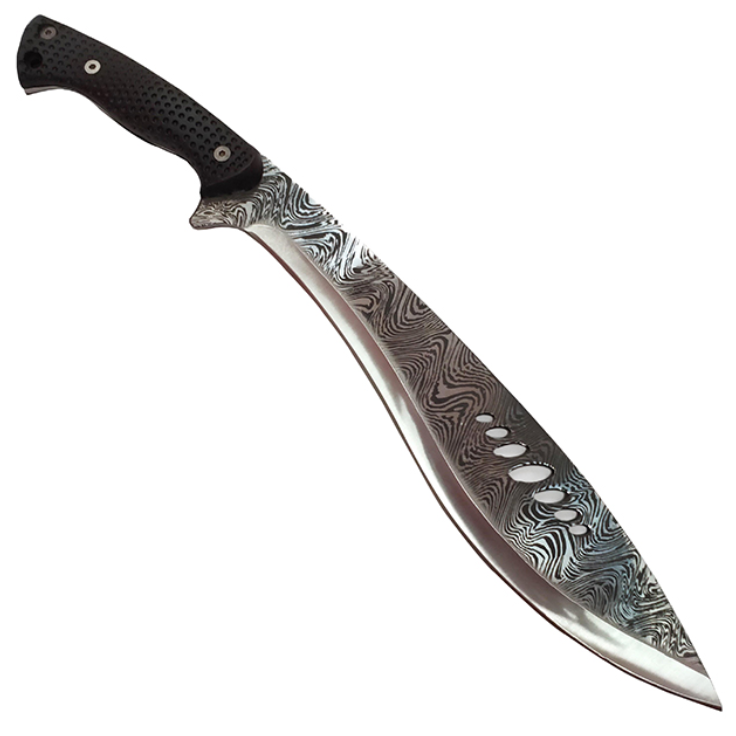 The Different Parts of the Khukri

The Khukri has three primary sections, namely the blade, handle and sheath. When assembled and fixed to each other, the khukri is complete.

For starters, the iconic blade is traditionally been made of “Himalayan Steel” which can be described as high carbon steel. It is extracted in its raw form as iron-ore from the rustic hills of the Himalayas. From there, the material is smelted and hardened using a special skilful technique that has been passed down from the old days.

Most Khukris have an inbuilt convex edge that gives it both durability and strength. This is especially useful when the knife is drawn for hacking purposes.

The second component is the handle that is typically made from walnut or rosewood and water buffalo horn. Meanwhile, the third component is the sheath which nowadays consists of a simple design with less value being placed on it.

Part of the sheath is its two accompanying small knifes known as Karda and Chakmak. These small knifes are intentionally different, with one being blunt while the other being sharp. While the blunt knife is great for lightening live fires from flint, the sharp knife can be utilised for more general purposes. However, these knifes are less favoured in the current modern day as alternative methods to accomplish their purposes exist.

Purchasing a Khukri for Display Purposes

If you are interested in owning a ceremonial khukri, you can find a khukri for sale online. We suggest that you check the credentials of the supplier beforehand and look for prior customer reviews. This will ensure that you receive a good khukri in great condition.